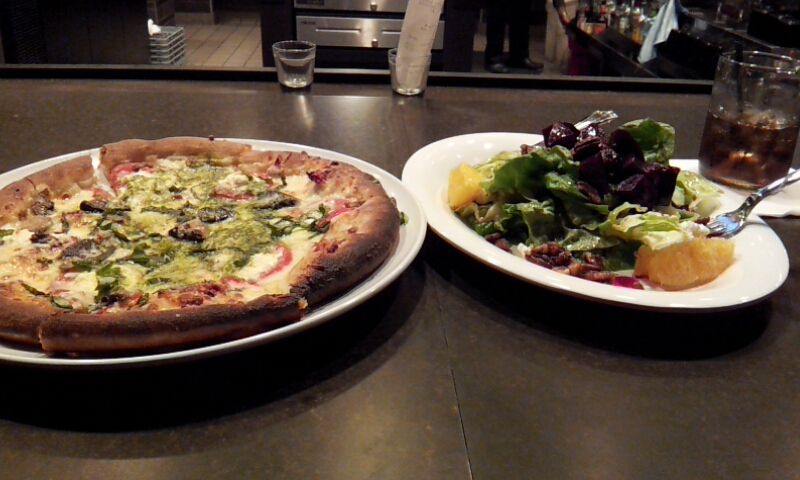 As I begin another weekend adventure I find myself close to home in Los Angeles at LAX with five hours to kill until my connecting flight takes off. I decided to check out the Wolfgang Puck restaurant bar to treat myself to  a nice meal and a couple of drinks. I ordered the four cheese pizza with wild mushroom, and a bibb lettuce salad with roasted beets, walnuts, and gorgonzola on top. I also had a few big boy drinks, so I could pass out on the plane. The pizza was very crispy from the wood fire over, it had gorgonzola, mozzarella, and goat cheese with a pesto pasta sauce and some basil and tomatoes. Other notable dishes I saw other people near me order were the spring rolls which I could smell from three seats away and the bacon wrapped meatloaf. The bar had a good mix of people on business and vacation, as all hotel and airport bars should. People on their way to places including Australia and New York City, I was on my way to DC. The restaurant was very modern looking with lots of opaque dividers, everything was black, it actually reminded me of a Japanese restaurant.

I thought about taking the rest of my pizza to eat later, but it was so good I wanted to give the pizza and the chef the respect of eating it hot and fresh so the cheese would stay perfect, as it  was. Wolfgang you’ve done it again with this small restaurant in the airport, which you’ve probably never even been to. Next time you find yourself at LAX for a few hours and want to relax for a little bit check out Wolfgang’s