Over the past 2 weeks I moved from Southern California to Washington, DC, in between I realized I was trying to turn my road trip (relocation) into a regional BBQ tasting extravaganza. I ate different styles of BBQ in California, Tennessee, Virginia, and finally Washington, DC. Tennessee is really the only of these which is highly acclaimed for their pig products.

I am not stranger to this BBQ joint (I’ve written about it once before in a compilation of the top 5 cheap places to eat in San Diego) , which is actually one of the highest rated and reviewed places on Yelp out of the millions of restaurants and businesses reviewed. 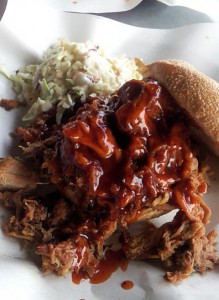 My cousin Ko was down in San Diego on spring break, I was at the tai end of my culinary tour of San Diego before I departed. Phils was one of the places I needed to eat at one last time before I took off. We both got the Broham sandwich, a mountain of pulled pork smothered in Phils signature sauce. I have a pretty large appetite and the Broham sandwich is just about enough food to make me call it quits for the moment (anyone who knows me could testify to this and recount the infinite amount of times they have seen me eat a whole tables worth of food). We also ordered a side of baked beans and french fries. It was unusually warm for late March in San Diego, so sitting outside was a great option. Other notable items at Phils are the ribs which might make you think of Fred Flinstone chowing down on a dinosaur bone because of its size. The onion rings are outstanding too, they basically take a giant onion and beer batter fry it to perfection, no sogginess to be found here. 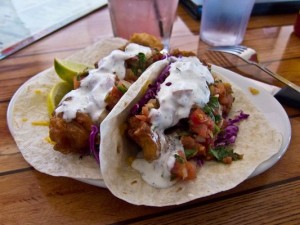 1. South Beach Bar & Grill (Ocean Beach) - One of the first places in SD that I loved. If you like tacos or just seafood in general this is the perfect place for you. All day long Tuesday and every night after 10:30 PM all of the tacos on the menu (except the lobster taco) are $2.50 and the portions are out of control big. You can get anything from a wahoo to fried oyster taco. Not only are the tacos great and the beer plenty there is a perfect view of the OB pier and the ocean, making for a great place to catch the sunset.
END_OF_DOCUMENT_TOKEN_TO_BE_REPLACED 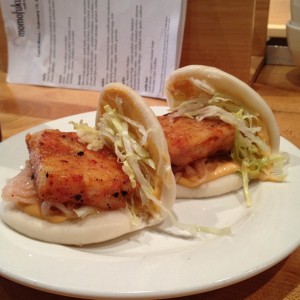 work, so I figured why not grab a snack and a beer. I started off with a Kelso pale ale, which I thought was very fitting seeing as it is a Brooklyn beer and I New York City and also an order of the shrimp bun. The bun was one of the best appetizers I have ever had. The pillowy bun was holding a shrimp pattie covered in spicy mayo and diced cabbage, I could tell how fresh the bun was. I am used to bbq pork buns, more commonly scene in Chinese food. It was a real treat to try out this different type of bun.
END_OF_DOCUMENT_TOKEN_TO_BE_REPLACED